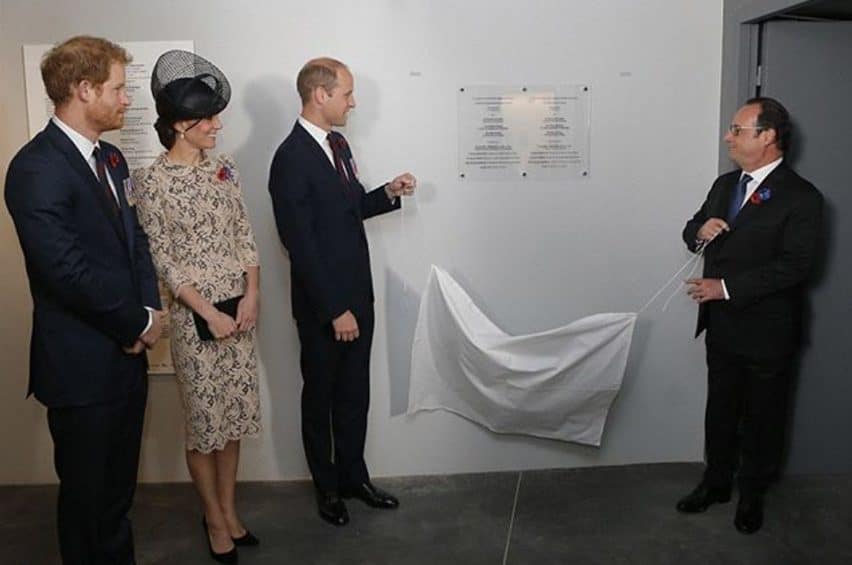 Located close to the Thiepval Memorial, these new galleries provide visitors with a unique museum experience and include a vast panoramic mural of the offensive of the 1 July by Joe Sacco, German and French perceptions of life at the front, a gallery dedicated to the Missing and another to the Aces of Aviation featuring a replica of the aircraft flown by Georges Guynemer. 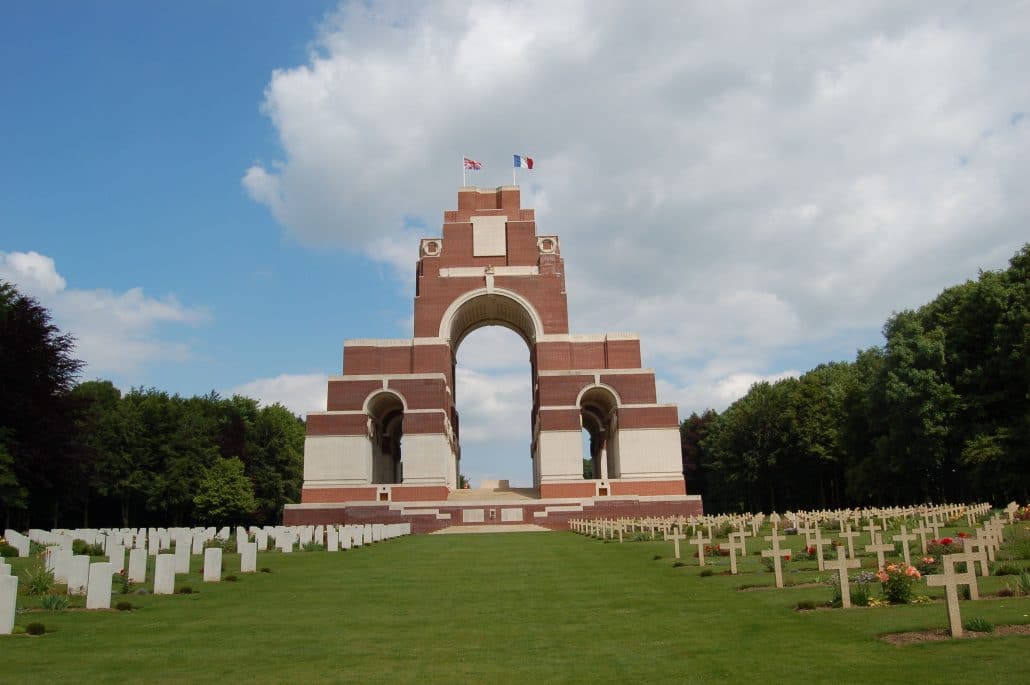 A museum dedicated to the battles of the Somme, remembrance, the Missing and the Aces of Aviation.

Built in complement to the existing centre, it is devoted to the history of the battles of the Somme, especially the Somme Campaign of 1916, and to the memory of the Missing. The permanent exhibition of 400m2 unites museum pieces, archaeological artefacts, multimedia, and large-scale installations such as the replica of Charles Guynemer’s aeroplane. The 60-metre long mural by Joe Sacco opens an imaginary window onto the 1 July 1916 battlefield.

This unique and original exhibition provides visitors with an informative experience charged with emotion.

Highlights of the visit:

The Battle of the Somme: The Offensive of Summer 1916 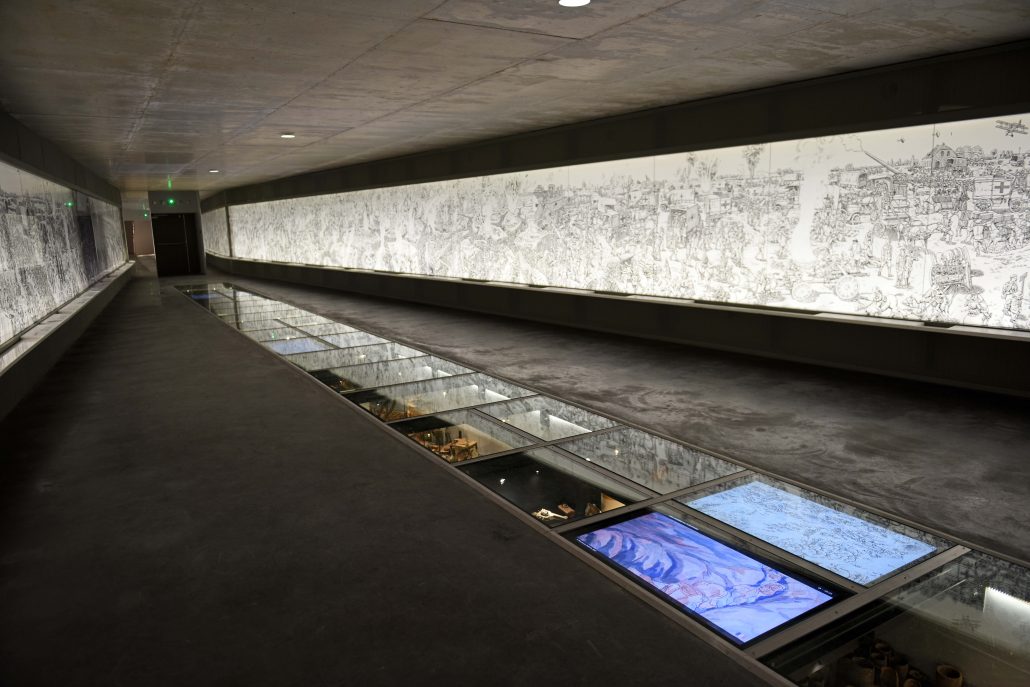 The British suffered their worst day in military history on the first day alone: 20,000 soldiers were killed in the space of just a few hours on 1 July 1916, decimated by German machine-gun fire.

The gallery devoted to the Battle of the Somme opens onto a panoramic mural by illustrator Joe Sacco; it depicts the harrowing day of 1 July 1916, hour after hour. Reproduced onto 60 metres of back-lit glass, it provides a panoramic view of the battlefield, a graphic narrative of military operations.

In the centre of the hall, a vast display pit covered by glass presents collection pieces and archaeological remains of the war. Short videos provide complementary information about the mural: commentary on the scenes presented, historical information, archive footage, and educational animations. At the end of the hall, a Maxim machine gun captured by a British regiment at Thiepval reminds visitors of how heavily the Germans defended this location: Thiepval ridge was an Allied objective of the 1 July 1916; it was not taken until the end of September.

The Multitude of Missing 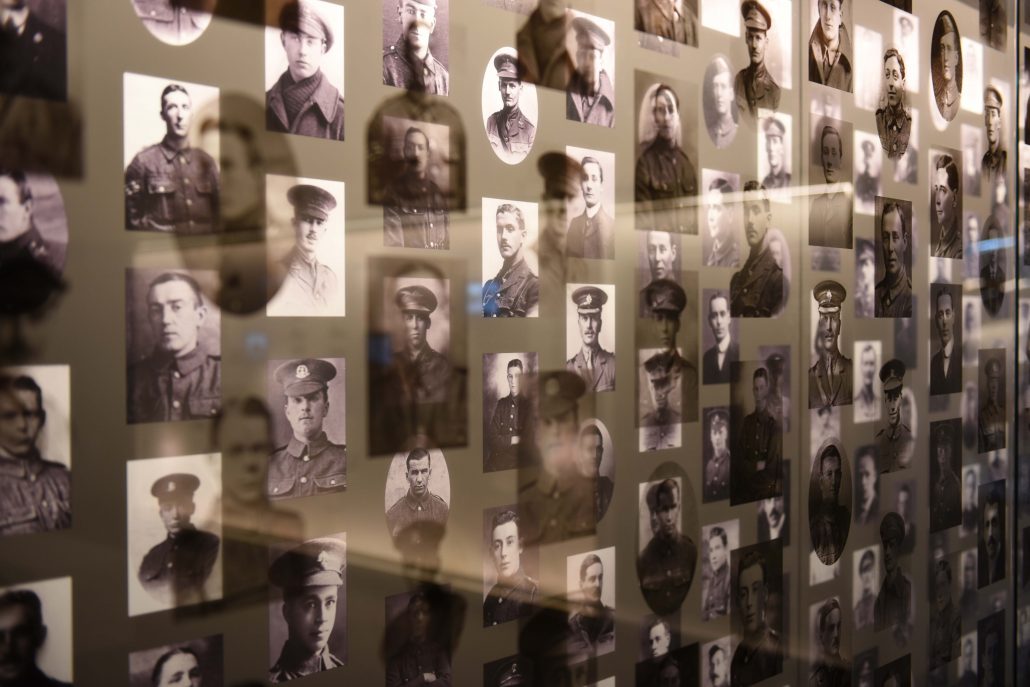 The Thiepval Memorial is dedicated to the 72,194 British and South-African soldiers who went missing on the battlefields of the Somme from July 1915 to March 1918. A symbol of the brutality of the fighting, the Missing are numbered amongst every nation that fought during the war.

Like a “chapel to the Missing”, an intimate hall is dedicated to these men who were caught in the grinder of war. In an interactive manner, innovative multimedia enables the individual stories of these lost soldiers to be “captured”. On the walls, showcases present symbolic artefacts: keepsakes conserved by families, letters, official documents and personal objects, which each tell the story of loss, and of a grief shared by a family and nation.

Heroic Figures: The Aces of Aviation 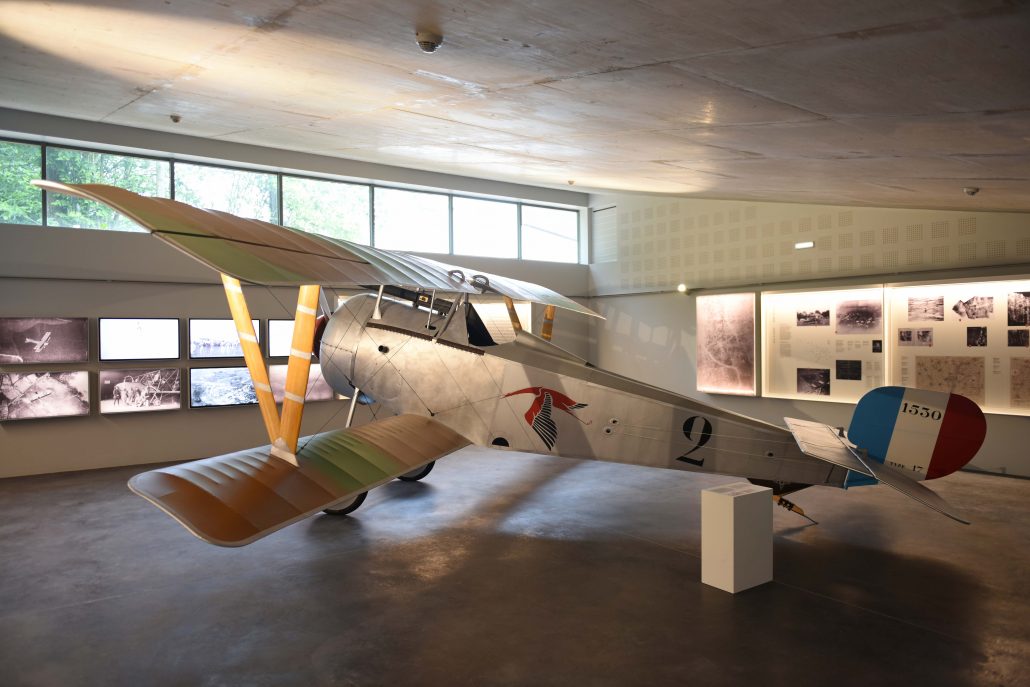 Opposing the multitude of Missing, the exhibition examines the creation of great heroic figures. This large hall presents a life-size replica of the aeroplane belonging to Georges Guynemer and portraits of First World War aviators.

From 1916, the role of aviation in war had affirmed itself, encouraging the advent of great heroic figures. Individual heroes, like the “Knights of the Sky”, emerged in the face of the continuing death of the masses. The cult-like devotion shown towards these aces lasted in collective memory even once the war had ended.

The Historial, Museum of the Great War: one history, two museums

Immerse yourselves in the history of the First World War at the museums of the Historial of the Great War at Péronne and Thiepval. Visitors can purchase a combined ticket to these museums, which study the war in its every dimension.

At Péronne, visitors can learn about the History of the First World War through its permanent and newly renewed displays, enriched content and array of multimedia providing additional information about the topics explored and collections on display. An internationally acclaimed museum, the Historial provides visitors with a better grasp of history and promotes remembrance through a museum layout that studies both life at the front and behind the lines. It interweaves the views and memories of the three main nations at war on the Western Front. Amongst the numerous themes studied, which include daily life, the front, military equipment, technological evolution, propaganda and children during the war, visitors can discover a great number of British artefacts and documents.

Since 2016, a 20 minute film (viewable in four languages) acts as an introduction to the museum display, focussing on significant moments, the stakes at issue and the people involved. An app (available in four languages, including English) enables visitors, right from the age of seven, to better explore the museum and its collections.