The Historial was designed by Henri-Edouard Ciriani who used its architecture to express, with great emphasis, the building’s vocation, which is to explain the history of WW1 in a different manner, without reducing it to battles alone. 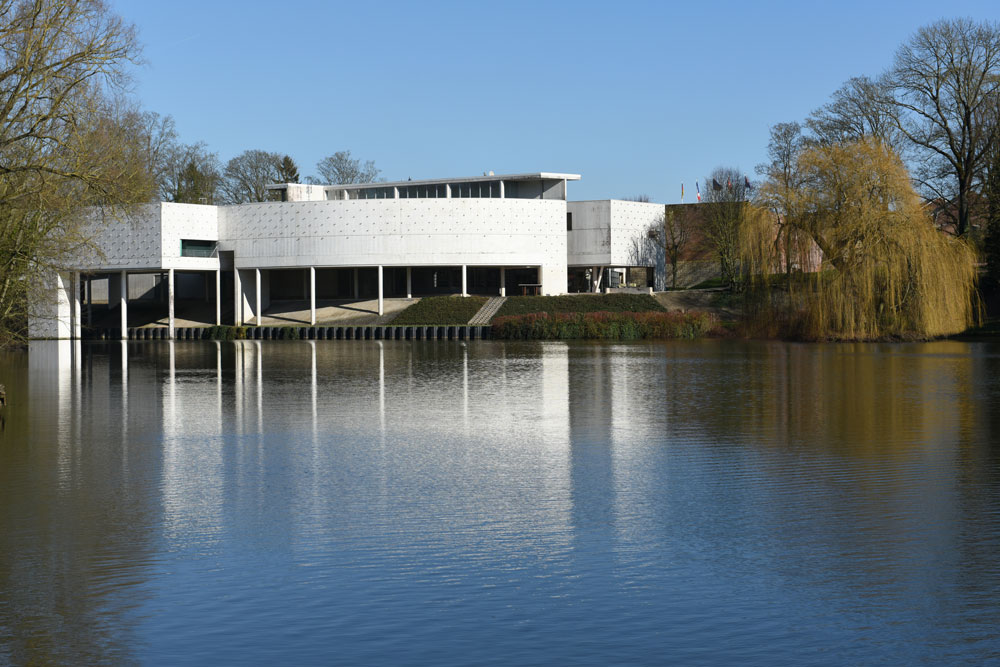 Firmly connected to the medieval castle of Péronne, its stark design gives the museum a timeless quality, emphasising the emotion raised by this tragedy.

An ABC of Le Corbusier’s principles that can be seen in the Historial’s construction:

Concrete is a “structural material consisting of a hard, chemically inert particulate substance, known as aggregate (usually sand and gravel), that is bonded together by cement and water.” Encyclopedia Britannica

Employed as early as Romans times, concrete became a widespread building material in 1848 with the advent of reinforced concrete, invented by Joseph Lambot. It was only from the early 1900s, however, that reinforced concrete was used in construction. Tested, developed and employed,  notably by Auguste Perret,  it was to provide the pioneers of modern architecture with the basis of their architectural language.

Le Corbusier used it by coating and painting it in order to obtain a smooth, uniform finish. To reveal his great penchant for this type of building material, he would later leave it in its raw and natural state.

At the Historial, Henri Ciriani used white concrete (obtained by using white cement) which he willingly called ‘poured stone’, thus emphasising the nobility of this material, on the same level as stone, brick and marble.

To achieve a smooth surface, Bakelite coated plywood was used for the shuttering of the Historial, and resinated wood for the pillars. Circular hollows, distanced 70 centimetres apart, can be seen on the various panels, corresponding to the spacers separating the sections of shuttering.  In order to preserve the characteristic signs associated with the use of this material, these indentations have not been concealed.

“Taking possession of space is the first gesture of the living, men and beasts, plants and clouds, a fundamental manifestation of equilibrium and permanence. The first proof of existence, is to occupy space” Le Corbusier, L’Espace Indicible.

The post-slab system, the open plan, the absence of a need for an outer load-bearing wall, the multiple possibilities offered by reinforced concrete and the artistic tendencies of the early 20th century with regard to space and its translation quickly gave rise to the notions of open and closed space.
Interaction, freedom and clarity are directly linked or rather incorporated to the idea of the “architectural promenade”.
Inside “one enters, walks, watches as one walks, and the forms explain themselves, develop and combine,”; outside “one approaches, sees, becomes interested, appreciates, moves around, discovers. One continuously receives different, successive shocks . And the game reveals itself. One walks, circulates, keeps moving, turning around.” Le Corbusier.

One of the consequences of ‘open plan’ and the free organisation of space is that the notion of a main entrance is no longer needed. Hierarchy between the four façades no longer exists, they are now treated equally. Le Corbusier commented on this with the Savoye de Possy villa (1930): “A house should not have a front. Located on top of its dome*, it should open up to the four horizons” (*dome refers to the site: pasture lands and groves in the shape of a dome) Jean-Louis Avril, De Ledoux to Le Corbusier, Origines de L’Architecture Moderne, published by Demi-cercle, 1991.

Along with space and matter, light constitutes one of the basic elements of architecture. Modern architects, especially Le Corbusier, give it a predominant role. Along with space, it contributes to how the architectural matter is organised.
Henri Ciriani gave light a remarkable role in the Historial, both in how it is used and in what it achieves; the architectural features that introduce this light are very subtle. For example,  the breathtaking rift that separates the postwar hall from the other galleries, is perceived as a functional separation and a symbolic fracture, but it is also, especially with the square skylight, a feature enabling light to be captured and indirectly conveyed into the large central hall.
“Light, in an interior space, is what penetrates from nature, what places us ever so slightly in the cosmos. The cosmos is absent from underground car parks.”
Henri Ciriani in Architecture Aujourd’hui. Words collected by François Chaslin and Marie-Jeanne Dumont.

It is above all about taking into account the needs of man, “this animal who must be able to shake himself at leisure in the space of his own home,” that guides the architectural choices of Le Corbusier and led him to develop a grid of measurements in regards to the different parts of the human body. This ‘Modulor’, as he called it,  was based on the silhouette of a man, standing up, his arm raised.

This image of Modulor has become very well known.
Like the ancient Greeks, Le Corbusier designed architectural space so that the body could find its bearings within. Architecture, by taking man as a module, reproduces them and projects them beyond themselves. This projection is not infinite: its aim is to mark out the space in which man would otherwise float, without points of reference.” Its aim is to bring the immoderation of the universe back to human moderation.”

In addition to their support function, stilts raise the architectural volume, alleviate it and free space for circulation beneath the building.
At the Historial, the stilts take the form of white concrete columns, with a smooth and refined surface that was created by resinated shuttering. On the western side, the stilts raise the volumes and erase any effect of heaviness linked to the architectural matter.

“Architecture is the masterly, correct and magnificent play of masses brought together in light. Our eyes are made to see forms in light; light and shade reveal these forms; cubes, cones, spheres, cylinders or pyramids are the great primary forms which light reveals to advantage; the image of these is distinct and tangible within us without ambiguity. It is for this reason that these are beautiful forms, the most beautiful forms…” Le Corbusier, Vers une Architecture, Flammarion editions.